A call is going out to villagers and natives from Knocknagoshel to arise again.

Again, because the people of the locality did it before in support of Charles Stewart Parnell when he addressed a rally in Newcastle West in 1891.

It was for this remarkable campaign and march, from The Mall to the West Limerick town, that the banner was made with the now world famous slogan: Arise Knocknagoshel, and Take Your Place Among the Nations of the Earth!

Now, over 130 years later, the call on people and to action is to oppose  Eir Telecommunications plans to site a 15 metre tall communications mast in their midst.

Local woman, Michelle Keane is in the process of organising the proposed protest meeting being planned for the coming Monday, November 7th at 1.30pm outside the old telephone exchange in the village.

to erect a 15 meter high mast at the old telephone exchange at the bottom of the village across from Johnny Morrissey’s House and beside Lar Hickey’s house,” said Michelle.
The call is now out for all residents of the village and parish and board of management of the local Scoil Mhuire National School, Tidy Towns committee, all local councillors and politicians, Knocknagoshel Over 55 Club along with members of the Knocknagoshel GAA Club to meet on Monday at the time above outside the old telephone exchange in protest against the proposed siting of this mast.

Too Near the School

“Locals are very concerned that its location is not appropriate, especially as there could be health implications for school children and residents in the immediate vicinity,” Ms. Keane continued

“It’s too near the school and there must be plenty of other areas around the locality where they could site the mast.
“This is Eir Telecommunications second application for a mast in the last two years as the first one was initially for an 18 metre structure which was refused by Kerry County Council.
“The planning number for this application is: 2211/03 and submissions must be made before November 25th and it costs €20 to make a submission,” said Michelle in conclusion – for now. 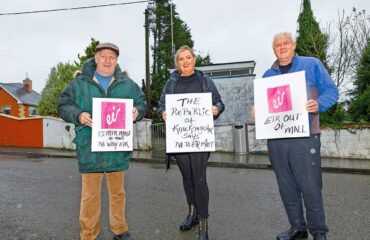